The last 60 days has seen some extraordinary activity in the mobile device space. Apple announced at its Worldwide Developers Conference a new high bar in portable computers, its own mapping service and a slew of software features in their upcoming iOS 6. Microsoft announced the Surface tablet and a new mobile phone operating system Windows Phone 8. Today, they bought PPI, the firm that does the large mulit-touch displays used by CNN. At Google I/O, the Nexus 7 tablet and Android 4.1 “Jelly Bean” and other things were unveiled.

Unofficially, the rumours of a smaller iPad have never been louder and there’s new speculation of Amazon refreshing the Kindle Fire and perhaps introducing a smartphone. As one old colleague put it to me, “there’s never been this much excitement! ”

But the real excitement should be reserved for what this all really means. What does it mean that Google Maps won’t be the default mapping app on iOS (and OS X)? What does Microsoft getting into big touch displays & the tablet-PC hardware business mean – particularly for the hardware OEM partners, like HP? What’s the meaning of Google making and directly selling tablets (and phones) on its website? Why is Amazon so intent on making and selling hardware to consume the content in its online store?

The phrase “vertical integration” used to be such an ugly term. It was synonymous with other bad words like “closed” and “proprietary” (as opposed to “open” and “standards-based”). It evoked horrible nightmares of vendor lock-in and walled-garden ecosystems. It was the very thing that customers had pilloried IBM for in their heyday in the 60’s, 70’s and 80’s. It’s what everyone thought killed DEC in the 90s.

Over the last decade, Apple has made a virtue of vertical integration. iMac, iPod, iTunes, iPhone and iPad have all been roaring successes. Even their stores are world beaters. The commercial results have been astounding both in terms of volume and profitability. Their secret sauce is how to continually innovate highly integrated products and run a highly efficient supply chain in tandem. That means getting the hardware, software, communications and services to work brilliantly well together whilst managing the partners who manufacture and assemble the devices. What once was conventional wisdom – for a company to do almost everything itself – has now reemerged in a newer form at Apple. The only thing Apple doesn’t do itself is manufacture and assembly of the hardware (but almost nobody in the US or EU does either).

Update: MIT Sloan has done a study of changing business models. They chart the impact of these changes at Apple. 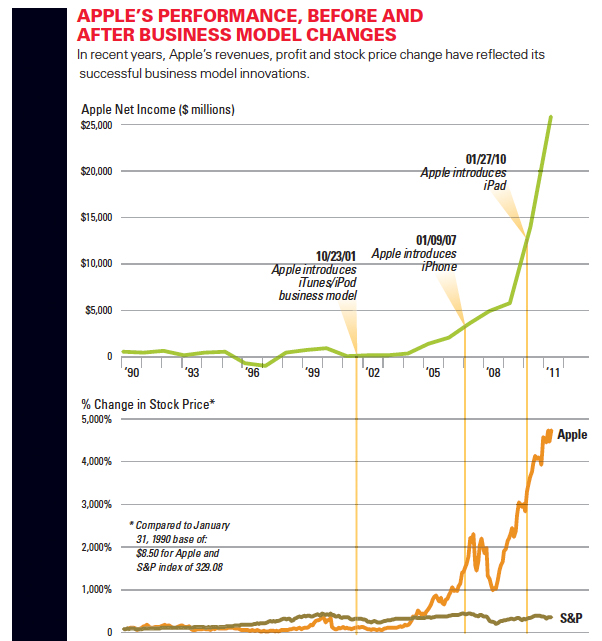 It now seems many elements of Apple’s model has some attraction to the like of Google, Microsoft and Amazon. The original idea behind the Google Nexus smartphone (a joint venture with Samsung) was to demonstrate to the hardware ecosystem how to make an Android phone that delivered maximum support for the Android software platform. Microsoft (and Intel) have tried this approach before too. Microsoft’s Signature PC spec and Intel’s Ultrabook reference platform were intended as guides to others on how to build hardware products.

But this, it seems, was not enough. Almost nobody built Signature PCs and the Ultrabook initiative has so-far failed to produce adequate competition for Apple MacBook Air. In fact, the Ultrabook is so much like the “Air” that legal proceedings are almost imminent. Apple vs Android patent cases are everywhere and still Android tablets do not seem to be selling well. Twice as many iPads are sold as all the Android tablets put together.

What is required, if recent announcements are any indication, is for Microsoft to design and directly sell in its own retail shopfront stores the Surface tablet (even if it outsources the manufacture and assembly, as Apple does). It also looks like they’ll be in the touch digital whiteboard game. What Google’s done goes one step further – they design & directly sell a phone, a tablet and a TV set-top box (all made by others) that only work with the Google Play store, a single one-stop online shop rather like iTunes.

The change at Amazon is more subtle but still important. They’ve focussed on extending their store and their single device – the Kindle – to be more like an iPad only much cheaper and significantly smaller. Both Apple and Amazon have the 300 million or so one-click credit card customers in their online store. Apple had the music & video content, Amazon had the e-Book content. Then they both invaded each other’s turf. Apple went into books & magazines and Amazon went into music & video. The Kindle had the advantage of running as software on the Apple platform but Apple had the advantage of disconnecting the Kindle iOS & OS X apps from the Amazon store. Apple is still way behind Amazon on books but Amazon is way behind Apple on music, TV and movies.

These changing business models are nothing short of titanic shifts in the ICT landscape. It is being fought by the giants of the industry – Apple, now the world’s largest company by market cap, towers over a once-mighty Microsoft. Amazon & Google, once dot-com startups, are now very significant global companies. For Apple to become the template that reshapes its own industry would have been unthinkable only a few years ago.

It is as Bill Gates remarked to Steve Jobs just before Steve’s death last year – “you proved your model works too”. I wonder if Gates grasped the deeper meaning of his words. It seems Apple’s business model has become the pattern guiding the changes to Microsoft’s business. Steve must be smiling wherever he is…