My first job was working for an econometrician (a mathematical economist). He taught me about the power of cycles as a forecasting tool. That started me reading & thinking about that subject. The first source I went to was Schumpeter’s “Capitalism, Socialism, and Democracy” (1942) who basically invented the term we all use so freely these days. Later on, I read Kondratiev’s “The Long Wave Cycle” (1928) who devised a longer-term economic cycle of about 50 years or so. Little did I know at the time how important these ideas would become.

For the next 20 years I worked in IT. The 1980s and 90s were times of great change in IT. The PC and The Internet changed the world during that time. It was a classic boom industry. Somewhere along the way, a voice inside me said “Things don’t go up forever”. I guess my earlier experience with cycles was speaking to me. So I did what my econometrician-mentor told me to do – go and find evidence for an intuitive notion and develop it into a rational idea.

By the mid-90s, I was sure the ICT boom was going to turn in the next few years, so I looked for somewhere to weather the coming storm. IBM & Microsoft showed some interest in hiring me so I took a job with Microsoft Consulting. When the Asian Financial Crisis came, I was sure it was an early sign of a collapse. When I saw the spending on Y2K and dot-com, I knew there’d be a backlash. When I saw the reaction of customers to ICT vendors (not just Microsoft), I was convinced the gravy train would stop.

After the tech-wreck came, people everywhere in the ICT sector were distraught. Stock-option millionaires were plunged into bankruptcy by margin-calls. All the vestiges of corporate excess – the parties, the long/wet lunches, the overseas trips – were over. After the terrorists attacked NY & D.C., all news turned bad – war, government deficits, freedoms curtailed. This was the turning point, I thought. This was the collapse of the boom that I’d been waiting to happen.

Three years ago, I stopped working full-time and decided to have a sabbatical. I read lots of books and spent lots of time online. I did some part-time freelance IT consulting for some friends and former-life colleagues. I managed to regain my health, which I’d let deteriorate by working & playing too hard. One of the things I’ve thought about in this new mode is how & why the ICT boom of the 80’s & 90’s crashed so badly.  Then I discovered Carlota Perez.

In her 2002 book, “Technological Revolutions and Financial Capital – The Dynamics of Bubbles and Golden Ages” (www.carlotaperez.org), she describes a economic model that works in cycles of about 50 years. She calls these “surges”. There have been 5 of these surges in the last 250 years characterized by: 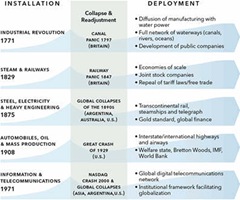 Each surge is initiated by a technology invention or scientific discovery. Surges have a structure – installation, collapse/readjustment and deployment. The NASDAQ crash of 2000 is the collapse of the current surge, according to Perez.

By looking back at economic history in this way, many things start to make sense. It put the dot-com madness into perspective. It explained why the PC & The Internet were so important in a much broader historical context. If the car, oil & mass production had brought about the Great Depression & WW2, surely the recent ICT recession wasn’t so bad. More importantly, the Perez model offers hope going forward. After every collapse there is a Golden Age.

This is a great thing for an academic economic historian to do – offer hope during times of great change. Most people are frightened by change. Most people have good cause for fear and anxiety in today’s world. The institutional realignment that always follows collapse in her model is clear & plain to see all around us. Unprecedented levels of corporate & government accountability is bringing tyrants and criminals to justice worldwide. Whistleblower legislation protects those who call out the wrongdoings. Many that do become whistleblowers become heroes.

Read the book. Study the bibliography. Read the references. What’s happening around you will make a lot more sense than it seems to at first glance.